Tarte Tarteist Pro Amazonian Clay Palette ($53) is a new “pro-level” eyeshadow palette that includes 20 shades of eyeshadow. 16 of the shades are completely matte plus Tarte introuces a brand new eyeshadow formula in this palette as four of the shades are iridescent lusterswith a microshimmer, duochrome finish. The Tarte Tarteist Pro Amazonian Clay Palette comes house in black and gold mirrored palette. As chic and simple as the packaging is I actually hate it because the front panel gets dirty so fast. I’ve been using mine the past few days and I got foundation on it, powder, etc….it looks like it went through a war zone. I wiped it down with a makeup wipe but sadly, it still looks rather bad. Le sigh! Oh well! The life of a makeup junkie right?

You get a total of 20 Amazonian Clay Eyeshadows in this palette all of which are 0.035 oz in size. Correct me if I’m wrong but if you aren’t counting the Holiday Palettes this is actually one of the largest single palette releases that Tarte has done as typically their palettes include anywhere from 8 to 15 shades. At $53 you do get a lot more in variety but not in size per ounce since palettes like the Tartelette In Bloom Clay Eyeshadow Palette and Tartelette Amazonian Clay Matte Eyeshadow Palette are $45 each with 12 eyeshadows that are 0.053 oz in size. So, 12 shades at 0.053 is around 0.63 total where as this palette contains a total of 0.70 oz for $8 more. I think the price evens itself out though considering you get a lot more of a shade selection for the price.

Call me boring but I was actually really excited about this palette. I’ve been embracing my matte side a while now and I was happy to get a selection of 16 new ones to try from Tarte. I typically like their matte formula as it is soft, silky, and easy to blend. This palette also contains a nice variety of colors from neutrals to lovely berries and purples. I see a shade or two that are similar to Tarte Grav3yardgirl Swamp Queen Eye & Cheek Palette like Whimsy which seems like a matte version of Dogman. There are a few similarities in shades here to past palettes but nothing I’d say was an exact dupe of shades Tarte has done. For me, these shades feel quite new as many of them are deeper and richer than ones I already own. Don’t be scared to buy it believing you already own the shades as the color options will surprise you here. 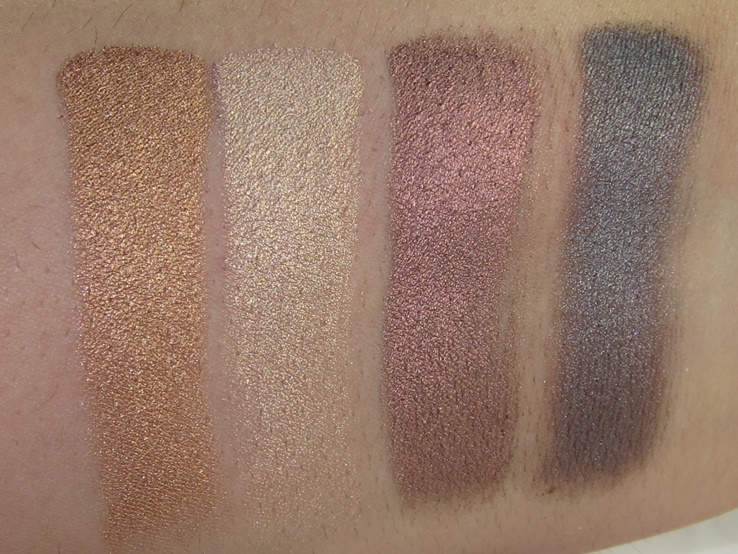 One of the stand out points of this palette are the four new iridescent luster shades. I question why Tarte doesn’t keep on formulas like this and the ones featured in the Rainforest of the Sea Eyeshadow Palette or the apparently limited edition Tartetist Metallic Shadow. I’m unsure whether the Tarte Tarteist Pro Amazonian Clay Palette is limited edition but from my understanding the Rainforest of the Sea Palette is (don’t worry, for Spring 2017 they’ll be a Rainforest of the Sea 2 Eyeshadow Palette or so the rumor mill says!) and the Metallic Eyeshadows are and that’s a shame as both are beautifully formulated. Likewise, for these luster shades! The luster formula is soft yet not so soft that the texture is powdery. These have a thin, soft, velvety texture that applies easily and looks wonderful as an overcoat to the mattes in the palette. They have a foiled finish that’s sparkly but not filled with chunky glitter or shimmer. I love how they accented the matte formula and created depth and richness to the completed look!

The mattes, mmm, they were ok. The formula was mixed for me and I struggled a little with the darker shades as they weren’t as silky or as powdery as the typical formula. The lighter shades were easier to work with but the darker ones I struggled a little with and felt they applied patchier. For example Mod, which is a delightful raspberry shade, was a bit patchy during application! Likewise for Drama, Vamo, Filter, Whimsy, and even Smoked. I wouldn’t say they were dry but on my lid they proved a little challenging to blend. The lighter shades were much easier to blend out but also sheerer in pigmentation as many of them worked as accent or color washes but wouldn’t be great all over the lid those shades included Classic, Innocent, Vintage, Fierce, Chic, Profesh, Indie, and Bold.

The shades are setup into groups of fives which at a glance gives you an easy way to create looks. Five across gets you a highbrow highlighter, shader, contrast, and crease shade plus a complimentary luster shade to complete your look and add a bit of sparkle and shine! There are two complete warm and two complete cool looks you can create using this method but obviously you can mix and match shades anyway you like! Plus Tarte gives you a step-by-step instruction guide to create four looks. For my looks below I used the top five shades and the third row of shades. I also did an all matte look and featured that look with and without the luster shade on top so you can see how the luster’s work so beautifully as an overcoat. I did point out a lot of the negatives of the palette but I actually did really like it. I think some of the darker shades require a good deal of blending for the most perfect finish but it was worth the extra effort as this palette creates some lovely eye looks. Granted, you shouldn’t have to work that hard to get a perfect eye look though and the patchiness during the initial application might be off putting for many. Personally, I don’t regret the purchase. It’s a nice grouping of shades and a fairly easy palette to work with.

Did you purchase the Tarte Tarteist Pro Amazonian Clay Palette?

How did it perform for you?