Shiseido Ginza Tokyo Skin Care & Makeup Collection is on sale today for 50% off or more on retail prices at nordstromrack.com! Tarte Maracuja Juicy Lip Gloss just launched in a trio set available exclusively at QVC and I got all excited because I do love a shiny lipstick or a stick lipgloss! If these are half as good as Tarte Rainforest of the Sea Quench Lip Rescue (but hopefully not as melty) I’ll be a happy girl indeed.

I really don’t need them right now because hello, face masks! But hey, I was walking around the house two weeks ago in purple lipstick and my friend Facetimed me and was like, “Wait, where are you going?” Nowhere! I’m just over here swiffering the floors with Urban Decay Pandemonium on my lips. So, why not right? We all need to keep up some sense of normal even if it’s wearing our favorite lipstick inside the house!

Plus these are super hydrating so why not? The three pack includes three shades of Maracuja Juicy Lips with a click pen packaging. These are were created with a formula that melts upon contact with lips providing glossy, moisturizing color!

There are two different three shade sets available in the following shades: If these are good I hope they make them permanent and available in more shades. I love the Sea Quench formula but it melts sooooooo quickly! It’s not an ideal lip product for toting around in the warmer weather. Hopefully, that isn’t the case with this formula! Remember when we were all obsessed with Philosophy Shower Gels? Or was I the only one hoarding them away like the apocalypse was about to go down? One of the best things about the changing seasons was the fact that Philosophy would slide into my beauty world with some new scented shower gel. There were Fall ones, Halloween ones, Valentine’s Day ones, Christmas ones, it was such an amazing time for shower gels in

I’m still trying to figure out why I liked them so much as the scents were so fleeting. It was great if you just wanted to smell like a cupcake in the shower but I’m that girl that wants the scent to linger and I have no issues with my hair and body smelling like a cinnamon bun outside of the shower. My best friend always tells me, “Darling, why do you always smell good enough to eat?” Thank you so much I like gourmands and I won’t apologize for it ha!

Philosophy Cinnamon Buns and Bubbly Shower Gel still makes a guest starring appearance in my bathroom but I sure do yearn for the days when they did all those great seasonal scents! If you’re feeling a bit nostalgic this Philosophy 16 Piece Scent-Sational Shower Gel Collection might bring back good memories! It includes 16 x 6 oz Philosophy 3-in-1 Shower Gels that can be used as shampoo, shower gel, or bubble bath! The set is $79.94 with free shipping or 4 Easy Pays of $19.99.

The set has some of my favorites like Bubbly, Fresh Cream, Senorita Margarita, and Cinnamon Buns!

Which was your favorite Philosophy Shower Gel from back in the day? What’s cooler than the Wet n Wild Pac Man Collection? That would be the new My Melody and Kuromi Makeup Collection! Ahhhh! I’m so excited! I’m a complete kid so this My Melody and Kuromi Full Collection Box is screaming at me to snag it. It didn’t take me too long to hit submit on this and buy it. I’ve always been a Sanrio fan and Hello Kitty is so my jam. I have t-shirts, I have purses, I have school supplies, hell, I have have underwear with Sanrio characters. I’m not sorry about any of this. I remember when I was in like the 4th grade and my friend had one of those incredibly cool Hello Kitty pencil cases! I begged my mother for one.

Honestly though, as much as I love Hello Kitty one of my fav Sanrio characters is My Melody and of course, her arch enemy, Kuromi! Wet n Wild hasn’t released the collection individually as of yet but this My Melody and Kuromi Full Collection Box features the entire collection. It contains two different eyeshadow palettes with sixteen shades each that represent My Melody’s colors and Kuromi’s in the other. It also includes two shades of Liquid Matte Lip Color, two glosses, an eyeshadow brush, face brush, makeup bag, and a BlushLighter Palette much like the Wet n Wild Pac-Man High Score Blush Palette.

I’m not sure about Kuromi’s colors but I’m loving the pretty pinks in My Melody’s Eyeshadow Palette! This was a no brainer pick up for me! I can’t wait to get it. At some point, I’m sure that Wet n Wild will release the collection individually as well but if you love My Melody the entire Wet n Wild My Melody and Kuromi Full Collection Box for Summer 2020 is available now at Ulta for $65. 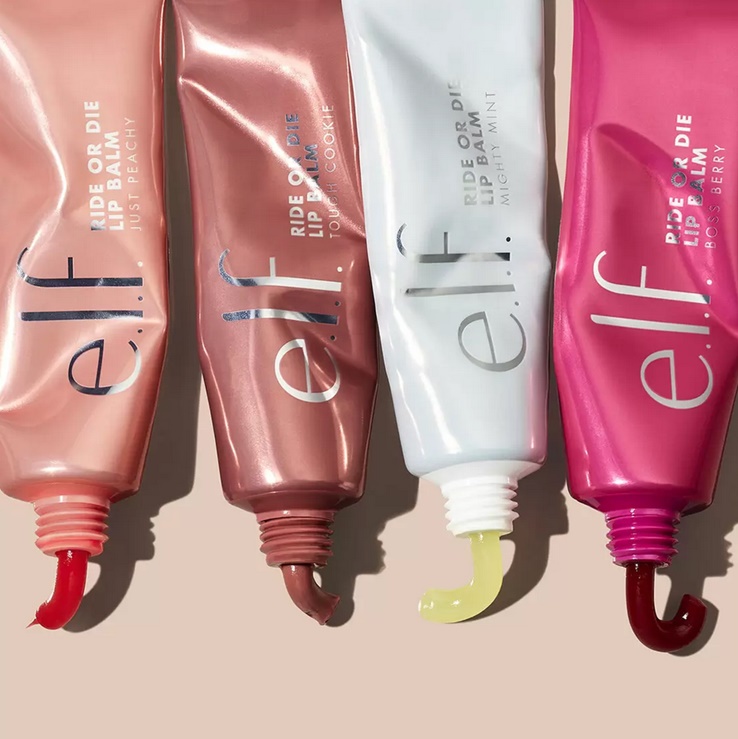 What’s your ride or die makeup item? Concealer for me! And Hard Candy Sheer Envy Bake, Brighten & Set Loose Powder to set it (yes, I love Ben Nye but if you can believe it I use Hard Candy more).

It’s a bad time to introduce a lip balm but speaking of ride or due products here’s the new E.L.F. Ride or Die Lip Balm that launched for Summer 2020. These $5 lip balms are available in four shade selections with a vegan, cruelty-free formula. They contain an infusion of rose oil and collage and give lips a sheer wash color with a pop of shine and a heavy dose of moisture to repair dry, cracked lips!

Are you thinking what I’m thinking? Dewy blush! Do you think they’ll be that pigmented? Maybe…! We’ll have to try that out!

E.L.F. Ride or Die Lip Balm are popping up now on the brand’s website.