I wrote in a prior post that the birth of cleansing balms in US drugstores seems to be upon us finally. I think with this launch we’ll see more and more drugstore brands bringing out their version. By January, I have no doubt that Burt’s Bees, Garnier, and others will likely have cleansing balms ready for market. It’s not that we haven’t seen a few already but I think more mainstream brands will start bringing them out soon! Already the Pond’s Cleansing Balm I reviewed a few weeks ago is gaining a ton of good reviews which has me hopeful for more drugstore brand cleansing balms to make an appearance!

Physicians Formula seems to be very focused on skincare launches lately aren’t they? Aside from their 80th Anniversary Collection (Remember the Hypoallergenic Lipsticks they launched?) their color cosmetics and base foundation product launches have been a little slow and there skincare ones quite prominent. So far, a lot of their newer skincare products like Coconut Milk Eye Makeup Remover, Charcoal Detox Cleansing Stick, and Rose All Day Oil-Free Serum really has impressed me which did give me some reservations about the new The Perfect Matcha 3-in-1 Melting Cleansing Balm. You know the old saying fool me once, shame on you; fool me twice, shame on me. I’ve been fooled plenty 🙂 But I’m always up for the challenge! 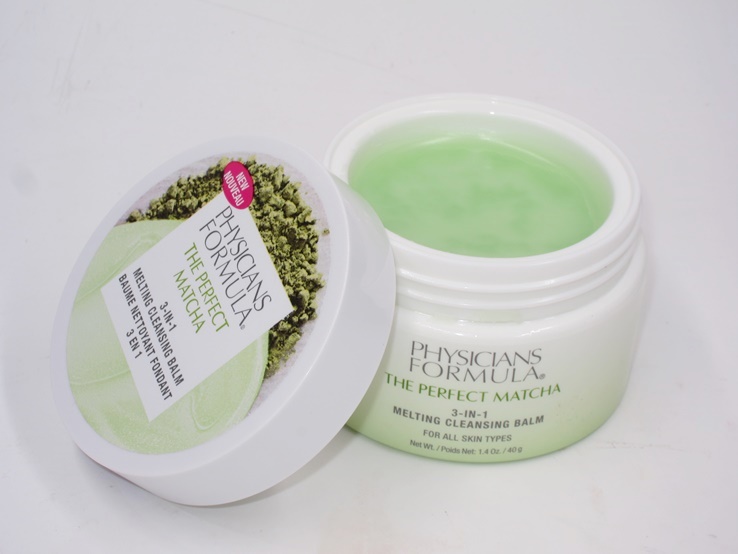 There are three main things I noticed first about Physicians Formula The Perfect Matcha 3-in-1 Melting Cleansing Balm. First off, I noticed the uncanny resemblance of the packaging to Farmacy Beauty Green Clean Makeup Meltaway Cleansing Balm. This is a hot button topic lately in the beauty world. We’re filled in a world of beauty copycats but for some reason it’s starting to draw stronger criticisms, objections, and opinions as of late.

The second thing I noticed which wasn’t hard to miss was the size of 1.4 oz which did draw a lot of negativity but not due to price ratio versus size but because some people felt the jar was too small which created some awkwardness getting the product out. This wasn’t an issue for me since I tend to use a spatula to remove cleansing balm from the jar and rarely does my fingers touch it. However, I was concerned that it was $12.99 and 1.4 oz in size as that felt very expensive compared to other brands like for example, you can get a 4 oz jar of one of Yes To’s new cleansing balms for around $7.99. And the last thing that I noticed which annoyed me is the fact that Physicians Formula has taken to launching a lot of their items on their new retail site before bringing them to stores or if and when they do launch in stores they prove difficult to locate. For example, this past Summer they launched their new highlighter and fragrance at Walmart exclusively (and on their website) and it proved pretty damn hard to find. This isn’t a new practice by any means as a lot of drugstore brands have been turning to their own websites to launch their latest products or collections such as Maybelline with their new The Matte Bar Eyeshadow Palette. I find it annoying to have to order from their website as I have to wait for it to ship and in many cases their is a minimum for free shipping. I’d much rather see these items get to stores at some point but that seems to happen less and less lately. Or you have the hunt around for them as they are exclusive to certain stores!

All that being said, which sounds like a lot of negative, let’s get into some of the positive things about Physicians Formula The Perfect Matcha 3-in-1 Melting Cleansing Balm. I love this stuff! Yay! I just wish it was bigger and cheaper 🙂

It does have a very light fresh green scent and I was a little concerned that it has orange peel oil in it as well as lactic acid. The orange peel oil isn’t exact a great pick for skin and the lactic acid I was concerned about using near my eyes (although, I am guilty of doing so without issues but just a warning it is in there however, their website does say “Clinically Tested. Safe For Sensitive Eyes & Contact Lens Wearers. Ophthalmologist Tested.” which made me feel a lot better!).

The formula is a soft balm which looks liked solidified vaseline. It breaks down very easily and changes to an oil as soon as you apply it on skin. Using a cleansing balm is a lot like using a cleansing oil! Simply scoop up a small amount (I use about a little more that a quarter’s size), apply it to your dry skin, and massage it on. It’ll break down if it’s a good cleansing balm and in this case Physicians Formula does break down very easily and becomes like a bit oily. Once that’s done you’ll apply a small amount of water to emulsify it and you can proceed to massage a little more. After that, rinse, and you’re done! This formula rinsed clean away without leaving behind any film or making my skin tight after! I wouldn’t say my skin felt hydrated after using it but I didn’t feel tight or dry either which is always important for me. It did a great job removing my makeup and left my face very clean. I don’t typically remove eye makeup with cleansing balm but I will say it removed any residue my own eye makeup remover didn’t very easily without causing cloudy vision.

I liked this formula a lot and feel like they aced it. I think up until now brands like NYX and Yes To have made an effort in the cleansing balm world but Physicians Formula succeeded in creating an excellent formula that does a great job with makeup removal! I just wish it was bigger, cheaper, and more readily available (I’m sure by January/February maybe it’ll start hitting stores!).

Physicians Formula The Perfect Matcha 3-in-1 Melting Cleansing Balm is a new drugstore cleansing balm enriched with Matcha Green Tea, Bamboo Shoot, and Lotus Extract. I felt the product was a bit small for the $12.99 price tag (1.4 oz) and was quite irritated it isn’t yet available at drugstores but merely on the brand’s website which I hope they redeem soon! Aside from that his is quite a nice formula aside from the fact it does contain a subtle fragrance as well as orange peel! Interestingly enough is the addition of lactic acid which concerned me due to using it around my eyes but the website says it is safe for eye use. The balm is soft, turns into oil of sorts after application, emulsifies quickly, and rinsed clean away without stripping my skin and easily removed my makeup!

I think if you like and enjoy cleansing with cleansing balms you’ll fit right in with Physicians Formula The Perfect Matcha 3-in-1 Melting Cleansing Balm. It has a delightful texture, didn’t dry skin out, and shows all the makings of a good, solid cleansing balm formula!